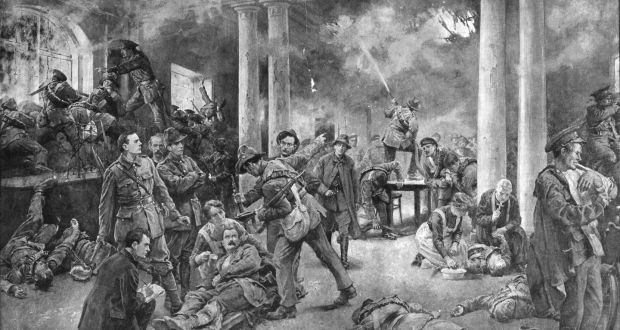 Easter Rebellion also known as Easter Rising, refers to the planning against the British rule in Ireland.

Easter Rebellion dates back to 1916.

It took place in Dublin in order to get freedom from the rule of British. Easter rising failed miserably due to poor commands of the Easter Rising leaders and a strategic response from British Army.

Although, this agenda was short-lived but it opened the doors for a bigger picture for Ireland. Instead of aiming for a lesser home rule, they came up with the idea of having a separate Irish Republic.

Why did the Easter rising happen?

The idea of Home rule was developed by a strong political party of that time which was head by ‘John Redmond’.

The start of First World War caused a delay in the plans of Irish Rebellion 1920 and upon that, John Redmond was decided to do back his Irish forces to get involved in the war. This idea was supported by the majority of Irish people but it was strongly disagreed upon by some of the nationalists.

They were strictly against the idea of Irish participating in the war. The main motive behind it was to defend Ireland, this movement was given a name of ‘Irish Volunteers’.

The debate of main reason why Easter Rebellion took place is still undecided. Some of the conclusions drawn are;

Why is it associated with Easter?

The rising is associated with Easter as it was planned to be executed on Easter Sunday.

The Easter rising had to take a big blow when the shipment containing weapons for the Irish failed to arrive from Germany. Blinded by the short-term objectives, the Irish forces were determined to carry out the attack even without the German firearms.

Orders were issued to attack the British military on Easter Monday.

Why did it fail?

The rising failed badly because of the following reasons;

As a result of poor planning, the Easter Rebellion fail to take the headquarter of British.

This became the main cause for the tables to turn for the Irish people. At first, the people of England thought that the rebels had turned their backs against England at the hour of need i.e. First World War

The incident of the execution that took place, changed their minds, as 15 of those executions were done by hanging the rebels rather than giving them a soldier’s death.

So, what happened after the Easter Rising is that ‘Irish Republic’ which was once only an idea, gained its freedom and had now acquired more than they bargained for.