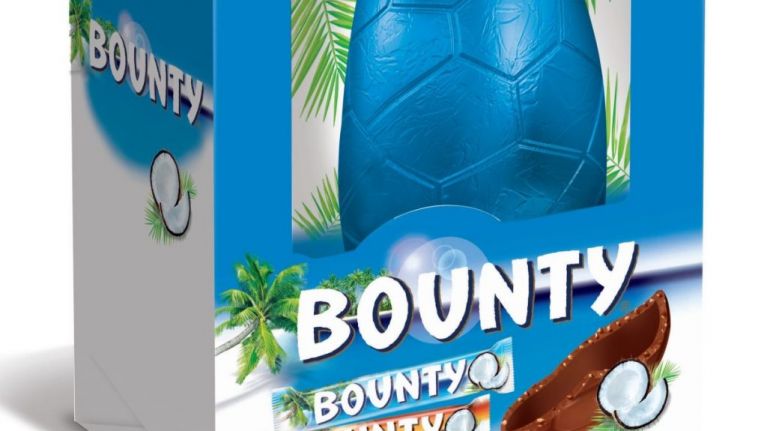 Big news for all the Bounty lovers!

Mars has just decided to drop a chocolate bomb in the shape of Bounty Easter Egg. Yes, we know its not like this is the first time they have decided to launch a chocolate Easter egg but this time the plan is to surprise their customers with something special.

The newly made Easter egg is filled with bits of coconuts in a chocolate Egg.

Since childhood, we’ve always seen two kinds of people when it comes to bounty chocolate.

Either you’re among the group of people who treasure those bits of coconut in bounty or you’re the type of person who hates bounty because of those coconut bits.

Another great thing that should be shared here, is the variety in the chocolate Easter eggs they have introduced.

They have blessed us with two options i.e. A milk chocolate bounty bar and the other one is a classic dark chocolate.

Isn’t this simply a heavenly treat for our taste buds?

Even though, this seems like the best chocolaty news regarding Easter 2019 so far. The truth is, this new chocolate item is found to have two conflicting opinions.

While some can’t help but drool over this mouth-watering news, there are those who are disgusted by the idea of having a bounty at all.

Regardless of several opinions whether they favor the new Bounty Easter egg or not. It is permissible to add that this is a great continuation of the tradition followed by the company.

Win up to £10,000 with Cadbury’s White Crème Egg Challenge

Seems like Easter 2019, is getting better and better with Cadbury deciding to roll in their worldly-famous white Crème Egg challenge.

For those of you who are unaware of this challenge. This challenge is about finding the hidden chocolate Easter eggs. Cadbury hides approximately 783 white chocolate Eggs covered in normal wrapping across the country.

Imagine the strive of so many people trying to find that hidden white Crème chocolate Egg that is certainly going to make Easter way more interesting. The hunt for the particular white Crème Easter egg has been started since January.

So, if you haven’t already started hunting, we suggest you get to it.

If it is of some help, several big stores have their share of hidden white Crème chocolate Eggs.

Apart from the Easter egg hunts, there’s one more chance for you to win up to £10,000. If you come across an advertisement of white Crème chocolate eggs on TV, just take a picture and you will have secured £10,000 for yourself. Also, there are going to be 30,000 milk chocolate Crème eggs vouchers.

So, have an energy drink and let’s go hunting.